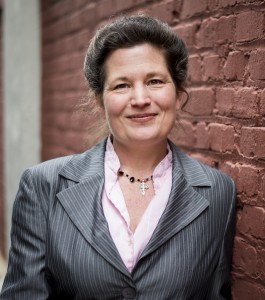 Research and writing will always be essential activities for me, but teaching is my passion.  I take the role of the professor seriously.  Nevertheless, investigating the most ponderous questions of political philosophy does not have to be devoid of humor and whimsy.  In the interests of effective pedagogy, I have been willing to go to creative lengths: placing my students in the state of nature and then provoking a war over acorns, recreating the 1787 Constitutional Convention in a role-playing game, awarding the coveted laurel wreath to the winner of a class oratorical contest, or adopting the role of Dolley Madison in order to defend her husband’s title as Father of the Constitution.  Political philosophy is not simply an intellectual endeavor; it is a way of life.

My own training in politics began with an education in classical rhetoric at Black Hills State University, and it was later matured within the great books and interdisciplinary milieu of the Institute for Philosophical Studies at the University of Dallas.  Entering UD with a focus on classical political philosophy, my education there culminated in the attempt to apply some of the critical methods gleaned from the Ancient understanding of ethics, politics, and rhetoric to the principles of the American Founding.

My academic pursuits for the past several years have maintained the dual interest in classical political philosophy and the foundational principles of America’s constitutional republic.  In particular, I have remained fascinated by the different conceptions of the virtues, the good life, and human nature, and how these different conceptions have altered our notions of the best regime and the best practicable regime.  After all, we cannot begin to comprehend the reasons why the American Founders sought political solutions that were different from the Ancients unless we can first appreciate how their understanding of human nature differed.  And while these differences are significant, they should not obscure important similarities.  Modern political philosophy is unquestionably a departure from the Ancients, but man’s pursuit of political justice did not terminate with the dawn of the Enlightenment!

My four-year stint as the Scholar in Residence at the Center for the Constitution at James Madison’s Montpelier has enabled me to steep myself in the political ruminations of America’s most intellectually profound statesman.  Although most of my recent endeavors have focused on American politics, I have been unwilling to relinquish my broader training in political philosophy.  That is why, when given my first opportunity to develop a course entirely to my own specifications at the University of Virginia, I chose to combine an education in Aristotelian rhetoric with an exploration of the ways that the enduring principles of political persuasion were engrafted into America’s constitutional order.  I hope always to continue these investigations, both within the pages of the Great Books of Western civilization and within the classroom.

This website is my online C.V.  A traditional C.V. can be downloaded here.