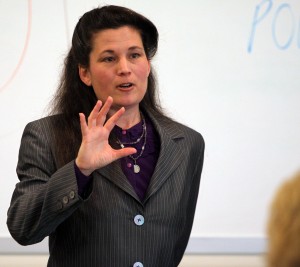 As a teacher, I also emphasize the importance of essay-writing as a way to examine a complex subject with a critical eye.  An exam will only reveal what a student has memorized; an essay forces a student to pause and spend time with a challenging subject, to comprehend and evaluate different theories in a meaningful way.  At both Baylor and the University of Virginia, I have offered voluntary writing seminars for every class that I have taught.  These seminars led the students through the steps necessary to analyze and articulate their position.  Most of my students have opted to take advantage of these workshops, and their participation has resulted in essays that were clearer, better organized, and articulated with greater precision.

I have taught in traditional college classes, developed online courses, and provided continuing education for middle-school and high-school teachers within 3-day seminars.  While online formats offer some advantages—namely, the widespread availability at a low cost—I believe that there is no real substitute for the interaction that can take place in a classroom.  Perfecting the art of the classroom lecture and the classroom discussion has been my primary aspiration.

♦ Courses taught for University of Virginia 2008-2010 and 2016 to present: “American Political Thought,” a course which explores the principal institutions, ideas, and ideals that have shaped the American regime, “Rhetoric in the Structure of American Politics,” examining classical rhetorical theory and exploring how these principles have been adopted, adapted, and employed within America’s constitutional framework, and “Creating the U.S. Constitution,” examining and reengaging the 1787 arguments that framed the Constitution.

♦ Courses taught for the University of Richmond 2012 and 2017-2018: “Leadership and the Humanities,” an exploration of the role of rhetoric and leadership in ancient Greece, primarily focusing on Aristotle’s Rhetoric and Thucydides’ History of the Peloponnesian War, “Modern Political Theory,” and “American Political Theory.”

♦ Courses taught in the Baylor Interdisciplinary Core (BIC) at Baylor University, 2001-2002: sections of “Social World I and II“, survey courses in political philosophy, economics, and social science that spanned works from Plato to Max Weber.

♦ Taught, “James Madison and the Bill of Rights,” a 3-day seminar at Montpelier’s Center for the Constitution that explored the intellectual origins, historical creation, and subsequent interpretation of the Bill of Rights.  Taught solo, October 19-21, 2012, and co-taught, with the Honorable Sue Leeson, March 7-9, 2014 and March 13-15, 2015.

♦ Taught “The Foundational Principles of the American Constitution,” a 3-day seminar at Montpelier’s Center for the Constitution that explored the intellectual foundations of America’s constitutional system of government.  Taught solo March 8-10, 2013 and November 11-13, 2011, and co-taught, with James Ceaser, October 29-31, 2010.